It was a lovely sunny Sunday afternoon as I descended the hill into Brenton on Sea to meet up with my fellow hikers of the JHC. The Benton on Sea Cottages were excellent, well equipped and nicely furnished. Little did we realise that this would be the best of our overnight stops for the coming week. A get together for a briefing session round a braai, and watching a gorgeous sunset over the sea, ended off the day, and we went to bed full of expectations for the unknown challenges that lay ahead.

Di had just completed a long hike and was keen to drive to the next overnight stop, so several of us took the option to “slack pack” any surplus non essentials in her car. That is always a great help, and as our sleeping bags were not required until the third night, we were very grateful to have those transported by car.

As we were hiking areas of non recognised trails, we were unsure of the time taken between overnight stops. Would we be able to walk on the beach or have to bundu bash along the cliff tops? The unknown trail always adds another dimension to any hike. One of the main factors of a beach hike is the tides, and as it was almost full moon we had Spring tides, and fortunately they were about as perfect as one could get for hiking, as the tide would be out for most of the time we were walking.

The beach sand was firm to walk on for the full five days, and it made for very pleasant hiking, and we strolled along at the sea’s edge, a soft breeze adding impetus to our steps, and then we arrived at a fast flowing river. It had not been really apparent on Google Earth, although I suppose it was, and none of us had waterproof bags. Not being deterred by this, we made our way further upstream and crossed the river, carefully transporting the rucksacks on our heads.

The first day was an easy hike, and we arrived at Goukamma in the National Park area earlier than expected. The rules of National Parks determined that access was not allowed to our accommodation until after 2pm, rules is rules, so we chilled out on the grass beside the river and had lunch. Vlei Lodge was good basic accommodation typical of Parks Board. However there was no onsite shop, and Di and I went off in search of some supper for the group. Armed with pizzas and beer, we arrived back at the gate to find it was firmly locked. They apparently close at 5pm. A detour was found, and by accessing through a side gate and chatting to a park ranger’s wife, we brought the pizzas to a crowd of hungry hikers. 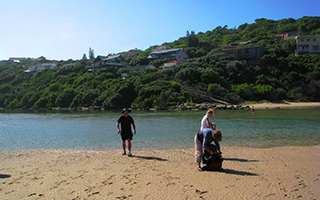 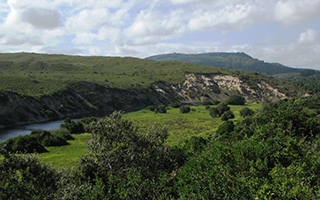 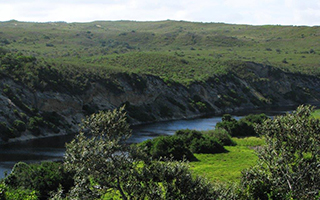 Crossing the river by an ingenious hand pulled ferry system, saw us all eventually transported to the far bank four at a time. Another lovely cool day made for pleasant hiking, and as we had a much longer hike we were grateful of the excellent hiking conditions.

Our overnight stop was at Afrovibe Backpackers in Segefield, which was typical backpackers accommodation with double bunk beds in a dorm. Unfortunately a riotous party in the restaurant underneath went on until about 2.30am, so sleep was a bit disturbed.

As we progressed along the trail we had many people join us for a day or so and then disappear, only to reappear a day or so later to hike with the group again. All were very well integrated hikers, and easily coped with the pleasant walks along the beach. Robbie’s GPS co-ordinates led us to Paradise Ridge with a minimal amount of worry as to where exactly it was situated. Let me explain. Paradise Ridge was at the top of a steep cliff, and as such is an ideal spot from which hang gliders take off. The steep path up there from the beach is not signposted or in fact very clearly defined, but our intrepid leader found it by using his GPS. Our genial host Jacques, had a big bushy beard, someway of a raconteur, and was most accommodating. He had thought of most of our requirements and the braai pack for instance was seriously large, and I used the pre-cooked meat for two days afterwards as trail food. Jacques even donned an apron and made pizzas in an onsite pizza oven. Drinks were kept in two cooler boxes and were priced very reasonably. The “accommodation” however was a big canvas bell shaped shelter with no sides, and we slept on the sand under the canvas in our sleeping bags. The bush shower was quite cute, although a walk up the sand slope was warranted to reach it. Di left her car at the top of the sandy slope to the camp, which was just as well as many 4x4s have given up trying to climb out of the dunes in the past, and Jacques makes a charge for getting them back to the top with his own 4x4. Paradise Ridge was basic but acceptable, and our host was very jovial and hospitable, which somewhat offset the sleeping facilities. 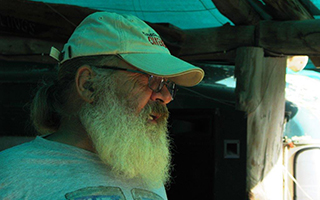 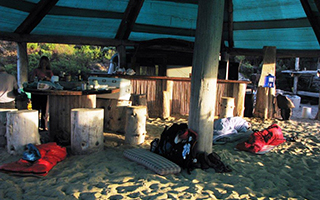 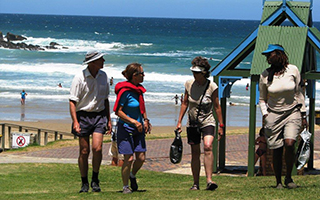 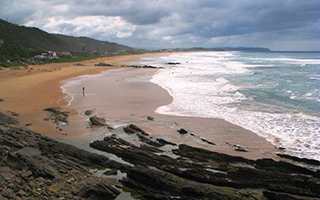 After the one nights use of our sleeping bags Di again came to the rescue and transported all our gear to the next stopover which was at Fairy Knowe in Wilderness. This is the oldest house in the area dating from1814, and I must admit that it really was showing it’s age in places. They are geared up for hikers, and the accommodation was basic but good, in fact the atmosphere of the old house was great. They offer canoeing on the nearby river, and several of the more energetic hikers went to paddle their own canoe, so to speak.

It was at this stage of the hike that the coastline became a little more difficult to negotiate, and so we opted for the short cut along the railway line. Well let’s say it was a railway line until there was a landslide, and SA railways being what it is, have done nothing to repair the damage. So unfortunately a beautiful and scenic rail trip will be no more. Crossing under a tunnel we came to the old Wilderness station, (many times voted as SAs most prettiest station), which really was now in a wilderness of weeds. However some enterprising individuals have turned it into a lovely little café. Well we had not walked very far that morning, but the call of a hot cup of coffee was just too great, and so in we all trouped, dumped our rucksacks in a corner, and had a mid morning coffee break. 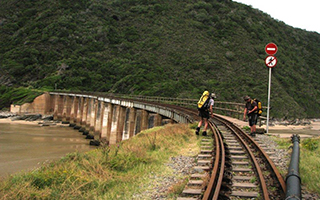 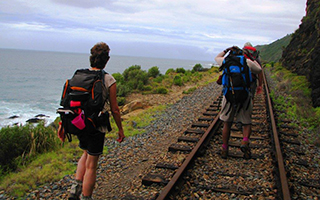 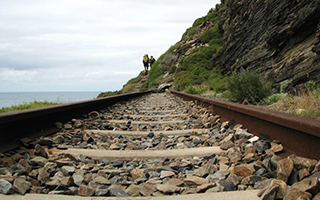 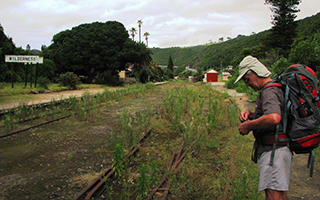 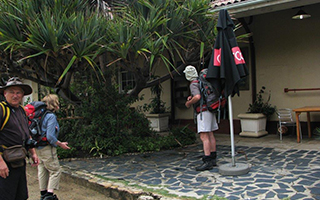 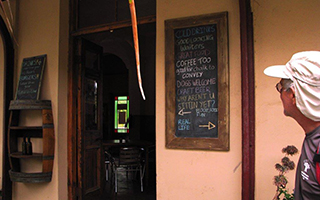 More tunnels brought us to a amazing place, which for me was the highlight of the whole trip. It was Colin’s cave which was right there next to the railway line. Not a normal cave as you may imagine, but it was full of the most eclectic mix of odds and ends that one could ever imagine. For me to try and describe it is not easy, as the sea shells and coastal bric a brack were arrayed in such wonderful arrangements as to defy description. A glance at the photos may give you some idea of the ingenuity of one man and his ability to create beauty from the mundane. 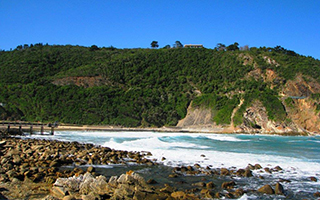 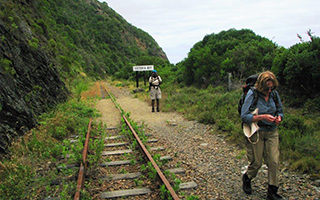 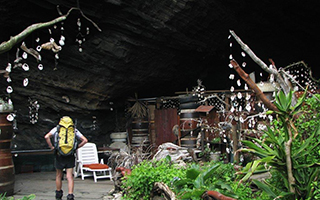 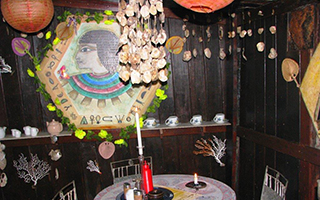 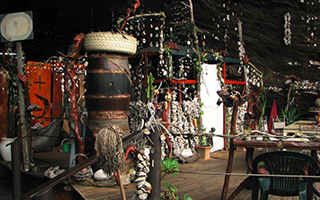 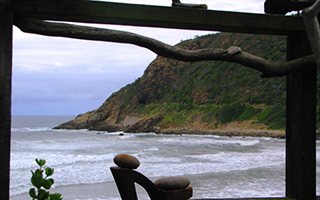 The rail bridge over the Storm’s River mouth could be a bit daunting to cross on a windy day, and it does have a sign saying “No Entry”, but it was felt that this was to clear the railways of any liability in the case of any accidents rather than anything else. The views along the coast from the rail line were spectacular, and well worth the effort of treading on often oddly spaced rail sleepers along the line. South Africa has lost a beautiful scenic train journey due to neglect by SA Rail.

And so on to our final destination of Victoria Bay Back packers, which was conveniently situated right in Vic Bay. Alan,Sandri and Di, departed for Joburg and the rest of us stayed on for the extra day. We opted for a meal made by Terry our friendly host, which was preferred to cooking our own food, and it was a very acceptable curry. So as we were there for two nights, we chose to also have the next night’s meal prepared by Terry, our in house chef.

Vic Bay is a big surfers paradise, and as none of us had brought surf boards, we had to just take a normal swim in the sea.

The local Saturday morning Farmer’s Market in Wilderness was quite a big affair, and Robbie, Jean and myself, had an entertaining morning wandering round all the stalls, and found that others from the group had also decided to visit and taste the home made produce.

On Sunday we all departed at different times. Robbie and Jean left very early, and I dropped Koen off in Mossel Bay on my way back home to Montagu.

Thanks to Robbie for organising yet another hike along a very pleasant and beautiful section of the South African coast. 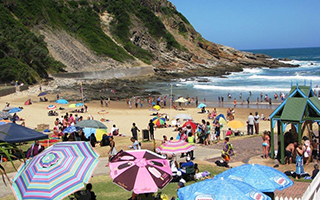 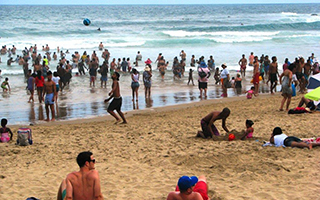 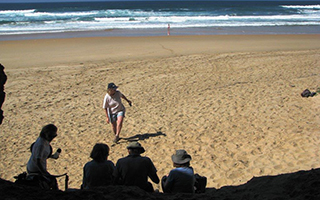 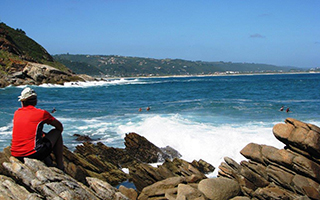